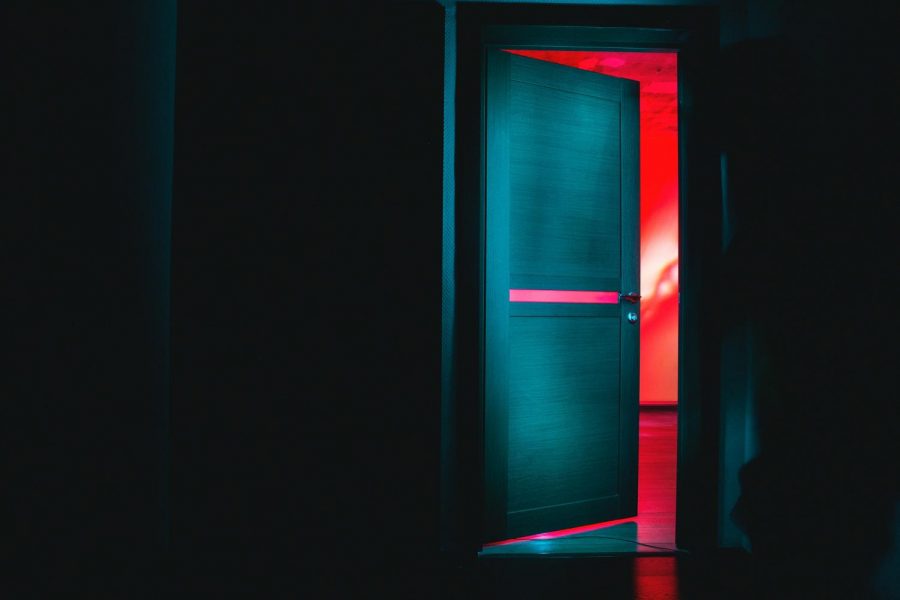 Photo by Dima Pechurin on Unsplash

The Beginning of the End: A Walk of Life

Open your eyes; you see yourself in a large circular room. Looking around you find yourself stranded with a room full of people. There is a sense of familiarity and connection to those around you, but a feeling of nervousness overwhelms you until a slight pull from your core has you pushing your way through the throng of people to the edge of the room to find everyone standing and crowding around a simple door. There is a sense of home, a warm feeling stirring your heart. The door looks used, worn with time, but cared for nonetheless. A shiny plaque stands against the door’s brightly painted wood, its metal untouched by the fingers of time, the intricate design and care the creator took to  carefully imprint cursive lettering into the plaque. You push open the door in a haze, you have such a strong desire to go through the door as if someone was pulling you on an invisible rope. You think, how strange that this door just so happens to lead to a seemingly endless hall, one similar to a hotel corridor. You and everyone else in the room file through the door behind you.

After walking for a while, you come across another door on the right. The door has a stark resemblance to the door that you’d previously gone through. Although there is no feeling of familiarity, no invisible pull or feeling to go through the door like the first one. If anything, the invisible tugging came from further down the long, daunting hallway. As you are about to turn away, the glint from the plaque catches your eye. Ignoring the invisible tugging, you see again the intricate cursive, but this time in yellow. You remember a close friend once told you yellow represented friendship as well as energy, but you have this foreboding feeling, a sense that this door shouldn’t be walked though, all this sense of dread coming from this door.

Looking back you can see some of your group members walking in a daze toward the new door; as they walk through the door a new sign appears on the worn door.  On the door in the same delicate cursive it read, “Where one door may close many more open; you may lose friends but many more await you.”

Below the writing, the date is written. After saying goodbye to the door, hoping in a way the people who walked through would be able to hear their words, the group continued down the hall when another door appeared on the left. This door gives off a sinister, almost evil, feeling. The scent of death wafts around the group. This door is an obsidian black, a color that seems to suck all the life out of the room where colors seem to be sucked away. Like the last door,some of the group members attempt to walk through. Many tried to stop them, but in the end, five made it through the door. The ones who walked through the door have a calm, almost surreal facial expression, as if to say they were ready for what lay beyond that door. Like the last door a new sign appears saying, “People may leave you, but they never really do; they linger in your thoughts and in your heart” along with a new date.

After losing the small group of friends to the mysterious doors, the group presses on, albeit hesitantly and wary of what’s to come. More doors appear left and right as the once large group presses on further down this seemingly never-ending hall. Door 25 is a floral-themed door which seems to represent springtime. In front of the door were flyers and other written documents, a graduation gown lay strewn across the handle of the door. With this new door even more of the group leaves, compared to the first two doors that took people; this door allows each of the people who left to say goodbye to you.

As your thinning group continues down the seemingly endless corridor realization strikes, each door would end up taking more and more of your group, the people who mean so much to you, who were your support, the ones who push you up when you’re down. It is conflicting whether or not to continue down the path, but the thought of finding what is at the end of the hall and the need to know why more and more of the group seem compelled to walk through the doors is too strong. It seems as if everyone is being pulled to a door.

Even though some of the doors repeat as you walk down the hall, new ones emerge sometimes. Instead of taking someone from your group, a door would open and someone new would join the group. As you continued down the hall, the pull you felt became stronger as if the invisible string was pulled taut. Soon your once large group becomes two, you could say for sure they were your best friends, but a door came into sight and once again they were ripped from you. There is no easy goodbye or anything to seal the hole they left when the door closes behind them.

You continue down the hall, the last one standing which seems bittersweet now that you’re alone. You press on nonetheless, with the words “you need to stay strong” repeating in your head like a mantra with each passing step. In the distance, you can see what looks like a door, but unlike the many doors you’ve passed, this door isn’t on your left or right but in front of you. When the door is finally at an arm’s length, you come to a stop. The tug you feel is the strongest you’ve ever felt: this is your door.

Unrest settles in. What happens when you finally pass through the door? Unlike the rest, this door is pure white without any date on the plate. The only remarkable thing about the door is how worn it looks, possibly from years of people opening and closing it. The words “Difficult roads all lead to the brightest of places; no matter how hard it may seem now, it will get better” is etched into the door and not on a plaque. You grab the doorknob, ready to accept your fate, and you turn the knob to walk through the door.